I started a new campaign for a client who wants to sell tickets to get “bums on seats” in early November 2016.  The budget is $8000. I’ve spent $7k so far and we’re 6 weeks in.  I’ve been sharing a little bit of its progress with my PTAT Group members as it’s been doing really well and I think there is good knowledge we can all use for inspiration.

At their bequest I’m going to go deeper into elements of the campaign. 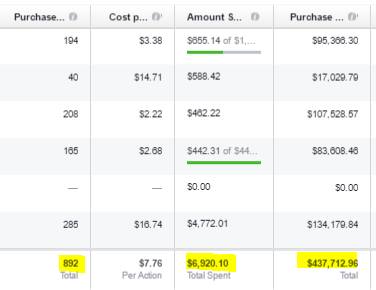 Column 1: Number of purchases.  Eg could be more than 1 ticket sold per transaction

Column 2: Cost per purchase (we want that as low as possible)

Column 3: Amount spent on each campaign. Clearly only 5 were actively promoted. I’ll talk about one below.

Column 4: Amount Spent in total for tickets bought from each campaign.

ROI is generally the one metric I care about.  All other stats are just for tweaking and optimisation to generate better ROI.

I can give advice about how to be ready for traffic, but it’s always easier if clients have nailed this already.  Hence I make successful businesses more successful.

But I do the same process whether they’re ready or not (sometimes you need to send traffic to know), so I’ll share some of that here with you. From the photo above, you can see I have 5 active campaigns.  They are:

Each of these campaigns had different strategies within them but to list all of them is too much for one article, so I’ll pick remarketing as it was the best performing of all campaigns based on cost per acquistion (CPA) and the simplest to explain.

But before I do, I need to cover some basic stuff that you should have in your business regardless.

A big feature of my report is that I know that I spent $462 in ad spend to remarket to people I’ve collected.  That’s an easy metric to report on because Facebook knows how much you spent.  What’s a lot harder is to know is how much people spent specifically from each ad.  For that you need to track and measure.

I’ve written heaps about collecting people and how you should use my plugin to do that for you so I won’t harp on about it, but if you don’t have a pixel on your website, do it now.

The pixel is more than collecting people, it can also track and measure with a thing called Facebook Events (not to be confused with the Event I’m advertising for).  For any commerce done online you already have a concept of events.  When going through the buying process, on separate pages you ordinarily:

Facebook’s pixel has an “event” for each of these stages/website pages.  So when I report on remarketing, see the photo below for example, I can see what happens at each stage

Each step of the buying cycle

If you look closely at each column you can see I targeted people for 5 days who haven’t purchased, and reached 11k of them 2 or 3 times in that 5 days.  867 of them came back for another look but 3,237 actually arrived and 224 purchased $117k worth of tickets.

Facebook knows who clicked within it’s app so 867 is direct from their system, but what could do is add a tracking event to their Thank You Page that reported back how many times it was seen (224) and how much was in the shopping cart total.  AND THAT HAS MADE ALL THE DIFFERENCE.

You can do that with Google Analytic but if you’re not tracking each stage and reporting back to Facebook it has no idea the type of person who buys from you and can’t lead toward them.  You need to train Facebook to be working for you.

This was pretty simple for this client.  I looked for 5 posts from the daily posts that we just send out every day to build buzz.  I wanted ones that were highly engaged and converted well into sales.

I my adset targeting people who’d visited the site but not purchased I let Facebook decide which of those 5 posts would appeal the most.  Facebook would show a couple of them over the 5 days.  So my prospects are seeing a good post with lots of social proof on it.  It converts well so it’s the right message and they’re all linked to the ticket page.  Plus they’ve already been collected from some other source that’s warmed them up a bit.  Like the promo video or a poster on a wall or something.

Either way, if you’re collecting people and expecting them to buy from you off one post don’t expect 61x ROI.  Sometimes it takes more good content before they make a decision to buy.

“But Phil, you said they were already successful, so aren’t you just converting people who were already going to buy?”

I’m glad you asked…..  and you’re right to some degree.  I’m about to prove to you that 25% of the people who did buy had bought in the past and just needed reminding, but the client actually wanted new, first time bums on seats, so that was actually my primary objective.  Facebook has released a new tool that really helps understand.

Facebook allows us to compare audiences now.  If you go to your audience library (for those of you collecting people), you can tick the check boxes beside each audience. 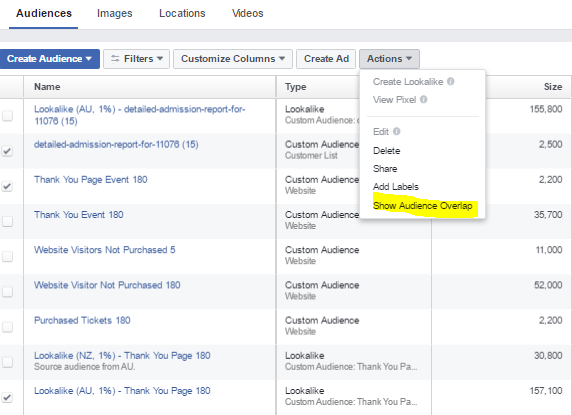 What I’ve done here is selected 3 audiences for comparison.

From there I can select 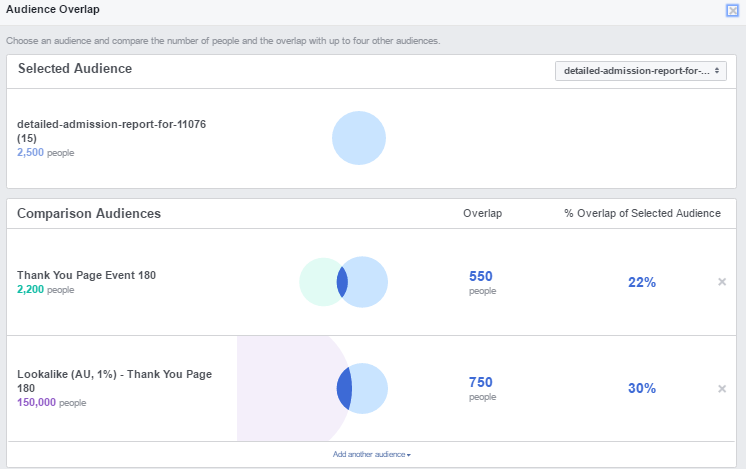 Section 1:  Is basically the “Old People”, what colour it’s circle is and how many there are in it.

Section 2: Is comparing “Old People” with “Current People”,  so any overlap is people who’ve bought in the past and who are coming again.

Section 3: Is compaing the overlap of “Old People” and “Prospects”.  This is really interesting because the seed for the Prospects is people who look like our Current People to within 1%.  30% of our “Old People” are in the Prospects.  That means Facebook has done a pretty good job with it’s targeting Prospects.

What this means is that if I target Prospects and exclude Current and Old People, I’m targeting New People who are really likely to buy.  This is the magic of Facebook and the 2nd key to 61x ROI

But just to prove that it’s actually working.  Section 2 show that off the Current people buying, 22% were Old People, or 78% are New People.  So while it could be debated that Facebook just finds people who are old customers, done right, it can use that knowledge to find highly relevant new people.

So those are some of the things that made this campaign great value.  It always costs the most to attract people.  Remarketing and following up with them is cheap.  Be a success in what you do already, know your clients and then train Facebook to know them too.  Don’t forget to collect everyone who is attracted to you, track them, and follow them up with good content so you can get great ROI too.

This is the added benefit of Social Media.  People engage.

Remember I said I picked the best five posts from the daily posts that had the best engagement and converted well and ran them to everyone we collected who hadn’t bought?  Well running them again to make sure everyone saw them meant they enjoyed even MORE engagmenet.  We paid for 800 people to see them but they shared a lot and reacted heaps, so all their friends saw that too.  Even more New Clients we found and it was all free and organic.